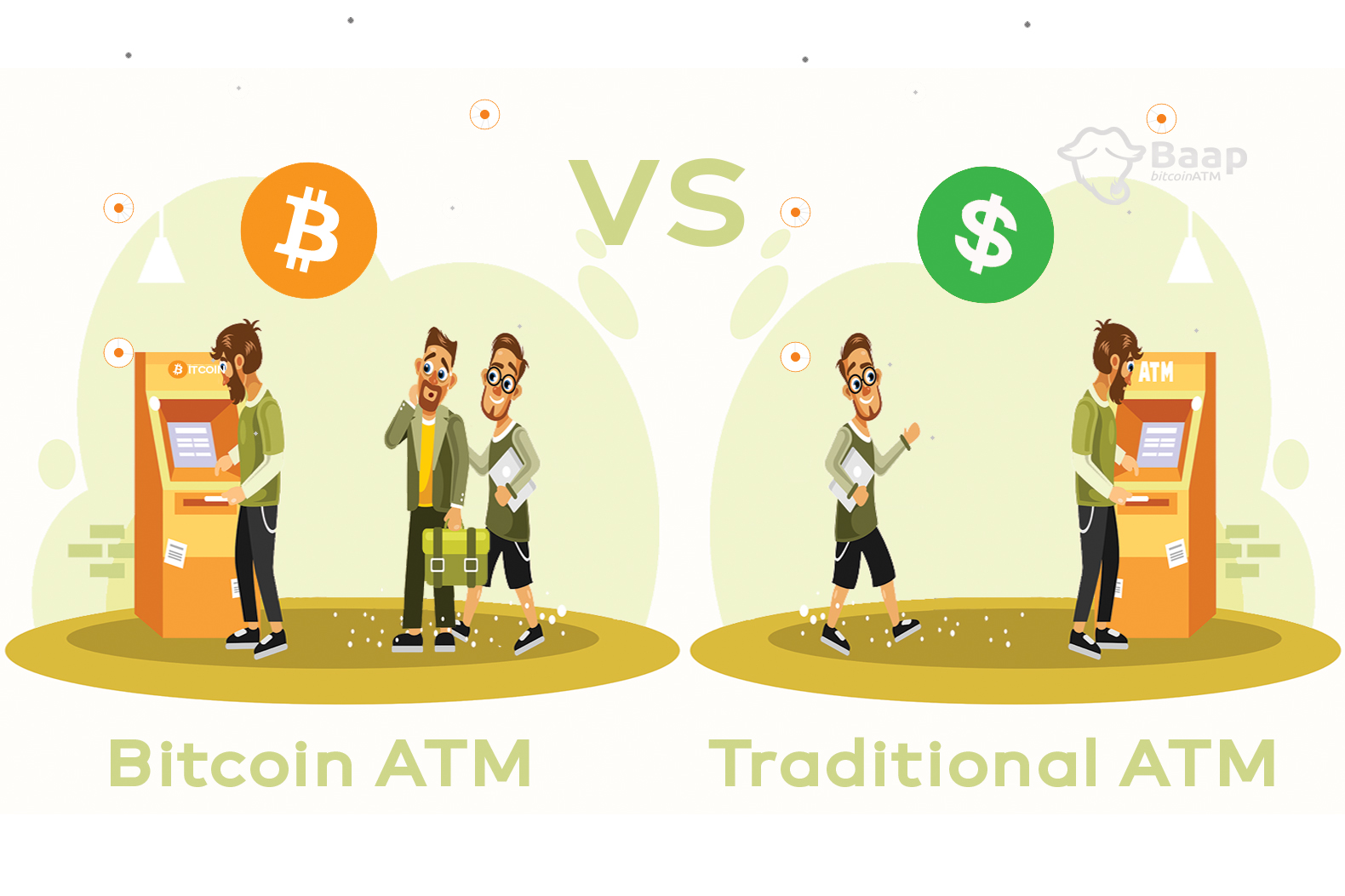 Difference Between A Bitcoin ATM And A Regular ATM

What is a bitcoin atm…

Any financial system takes a good amount of time to get introduced and developed. It takes decades for people to adopt a certain way of transacting as everything happens organically. The current global financial system that we have, has been in existence for over a century. And although it has worked for our needs, we need something better to power the 21st century.

This is where cryptocurrencies will play an important role. Bitcoin was introduced more than a decade ago, and it has slowly been leading a revolution. A revolution that will make the financial system of the world much better and efficient. In a way, the current system will get a huge upgrade.

Even the components and the network of the current system will get modified according to the new one. Take ATMs for example. Bitcoin has led to the introduction of bitcoin ATMs to make it easier for people to understand the new technology.

What Is A Regular ATM?

Regular ATMs are something that everyone is aware of. The word ATM stands for Automated Teller Machines. They have been around since 1969. They started from a single location and slowly spread throughout the world. It is estimated that there are more than 3 million units of ATMs in the world.

An ATM requires you to insert your ATM card or a debit card to withdraw money. It only allows you to withdraw the money that you already have in your bank account. There are some ATMs that also allow you to deposit money into your account.

What Is A Bitcoin ATM?

ATMs are a really convenient way for people to get access to their money. It saves them from having to go to the bank every time they need money.

A bitcoin ATM is a more recent phenomenon. In fact, the world’s first bitcoin ATM was installed on October 29, 2013, in Canada. In just over 6 years, there are almost 7000 bitcoin ATMs in the world covering 73 countries. The number of ATMs, as well as the presence in countries, is only going to grow from hereon. The United States has the most number of bitcoin ATMs followed by Canada.

A bitcoin ATM allows users to buy and sell supported cryptocurrency. Since every bitcoin ATM comes with clear instructions on the screen, they are pretty easy to use. The machine generally comes with a QR code scanner, a computer to manage all the transactions and a cash dispenser. Mostly, they look similar to traditional ATMs but some are smaller and more compact.

Buying or selling bitcoin and other cryptocurrency from bitcoin ATMs can be really easy. But you have to pay higher fees usually. The fees can range anywhere from 8-9%. Also, there is an added bonus of anonymity while using a bitcoin ATM. However, this anonymity can be enjoyed only to a certain amount. For higher amounts, you have to submit KYC. You can also find bitcoin atm near me as there are records of all these.

Other Type of Bitcoin ATM

BaapATM is a next generation ATM that is easy to use interface makes selling Bitcoin simple. You don’t need prior knowledge of cryptocurrency to use BaapATM. Transactions are simple and are completed within seconds. No complicated features to confuse you, just the tap a sell. To become a host click on this link.

Read More: How to start your own bitcoin ATM business

What Are The Differences?

Regular ATMs’ design has been pretty much the same. Usually, they are these big machines that you can find at convenient locations.

Bitcoin ATMs are usually smaller in size and have more vibrant colors. Many ATMs are painted in orange color to portray the color of bitcoin’s logo. Also, as technology advances, bitcoin ATMs are getting as small as a handheld device.

An ATM is called an Automated Teller Machine. That is because it allows you to do transactions without a human teller. ATMs are connected to a banking network and that is how they function.

A bitcoin ATM requires neither a teller nor a banking network. As we all know, bitcoin is a decentralized cryptocurrency. As such, all transactions are pushed to the bitcoin blockchain. That is why a bitcoin ATM is not technically an ATM. It is more of a kiosk.

Also, to use an ATM, you need your ATM card/Debit card in most cases. To use a bitcoin ATM, all you need is the QR code for your wallet address.

Traditional ATMs have no element of anonymity. This is because they withdraw money from their account which has a trace. In fact, even the location of the ATM can be seen on the bank statement.

Bitcoin ATMs can provide some degree of anonymity. Depending on the country, there is a limit up to which you can do anonymous cash transactions. It is important to remember that people can choose to remain anonymous for many reasons. Privacy is the number one reason for most people.

Traditional ATMs charge a transaction fee whenever you are withdrawing money from them. This charge has been increasing year over year in most countries. Even then, this charge is higher than bitcoin ATMs.

Bitcoin ATMs charge a bigger fee than traditional ATMs. But as technology progresses, this fee could come down quite a bit.

How To Find A Bitcoin ATM?

The number of bitcoin ATMs is on the rise. However, it will still take some time until you can find one in every corner. You can, however, use think link. Bitcoin Atm near me to locate the nearest bitcoin ATM to you. You can see its precise location and plan your days accordingly.