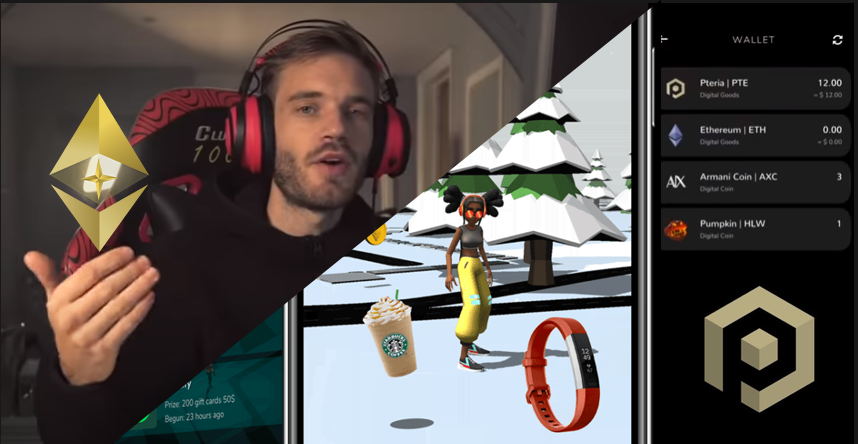 The popular Youtuber Pewdiepie is joining a new blockchain technology project called Wallem which is built on top of the Ethereum network. Broadcasting to his 107million subscribers on YouTube, Pewdiepie promoted Wallem by giving fans a short demonstration on how the game is played before his recorded session of Among Us.

Wallem is an AR (augmented reality) mobile game for iOS and Android users similar to Pokémon Go. In addition to the AR and 3D world, Wallem leverages the Ethereum blockchain for a native game currency called Pteria (PTE) and NFT-powered skins and items. Some might remember this game back in 2018, when it was in alpha and only related to cryptocurrencies. Since then, the team worked on it, developing and evolving the app. By navigating on the worldwide 3D map, users will be able to join events, catch brand points, gain tokens, and use them to buy different goods and services. Events feature prizes from various gift cards from companies like Nike, Spotify, and Steam, to an iPhone 12 Mini and even a Lamborghini Rental.

Blockchain gaming and non-fungible tokens have become extremely popular these days. Nonfungible.com shows that there has been over $1.5 million in NFT sales. In the last week, the average NFT sells for $60.58 according to the nonfungible.com stats web portal. Additionally, several virtual world games utilize blockchain technology and many of them leverage the Ethereum network. VR worlds like Decentraland, Sandbox, Wallem, and Somnium Space are all trying to revolutionize the metaverse.